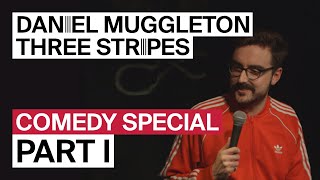 Australian comedian Daniel Muggleton is just woke enough to know he's an asshole, but who wants to be a hero these days anyway? A critically acclaimed, packed out 2019 Edinburgh Fringe run netted him multiple four-star reviews and a recommendation from The Scotsman.

His debut special Let's Never Hang Out aired on ABC Comedy in 2019 and is streaming worldwide on Amazon Prime produced by Comedy Dynamics, a Grammy Award-winning US company.

He's supported Alex Williamson, Tom Stade andSteve Hofstetter on tour, performed at the Tramlines, Y-Not and End of the Road music festivals and headlined comedy clubs across the UK, Europe and Australia.

Off-stage Daniel has appeared on The Feed (SBS), and written for A Rational Fear (FBi). He's also the host of 'The Union Jack Off' podcast.