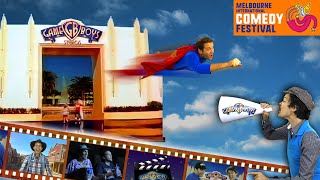 
RETURNING AFTER A SOLD OUT 2019 SEASON FOR TWO SHOWS ONLY!

Join brothers Eden and Josh — your personal guides for the world famous Game Boys Studios Backlot Tour! Try your luck as a studio executive and greenlight the next Norbit!
Wet-your-pants in excitement at the live-action Stunt Show!
Come face to face with a terrifying T-Rex!
And keep your eyes peeled for any visiting Hollywood producers - you might just get discovered! Or harassed.

For the past 5 years Game Boys have honed their unique form of comedy combining razor sharp writing, improvisation with the audience and literally hundreds of audio/visual cues.

'This is a show full of surprises... a masterstroke in comedy' My Melbourne Arts

'★★★★ An incredibly nuanced and pointed performance' The Music

TICKET OFFER: PURCHASE IN CONJUNCTION WITH WELCOME TO PATCHWORK PODCAST: LIVE AND GET $20 TICKETS

Performed by Eden and Joshua Porter