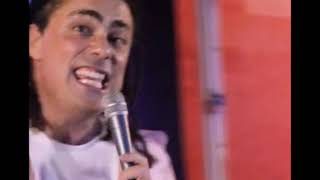 High-energy, fun, smart-arsery with a bit of sexy(ish) environmentalism thrown in too. And he kind of saves the planet at the end of it. You're welcome.

Like you, Steve Hili knows the world is in trouble. And he is worried about it. Also like you (if you are part of his target audience, that is) Steve Hili enjoys getting it on.

But the show is much more than that! With a whole range of topics being put under the microscope – from growing up (without a foreskin!) on the most Catholic island on Earth to dealing with Brexit-emboldened racists, the show has it all.

It even has tiny bit of real, actual, activism thrown in too!

Equally confident riffing off an audience or sharing on OTT sex story, Steve has the energy to lift a room and leave it gasping for more. An award-winning MC, comedian, writer, actor Steve’s first hour was called  “perfect”, “hilarious and eye-opening” by UK review website Voicemag. He has also appeared on Discovery Family, Sky, BBC, SBS, Colourful Radio and XFM

From breakfast radio to TV sketches via his high-energy theatre shows, Steve has performed in, Australia, the UK and all over Europe.

His first book State of the Nation was published by Midsea Books in 2016.

'The energy of a dog that needs to be taken out'. VICE