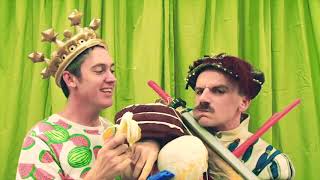 The Listies Hamlet: Prince of Skidmark

The Listies Hamlet: Prince of Skidmark

If you wish to make a contribution to support The Listies across these difficult times (as an alternative to or in place of a ticket purchased)  add as many “$5tickets” to your basket for our Sunday 19 April “performance”.

Australia’s favourite kidult comedy duo, The Listies, return to the Fest with a brand-new Badaption of the Bard. This is Shakespeare, Listies style – ninjas, ghosts, swords, dinosaurs and zombies!

Hamlet: Prince of Skidmark is a side-splitting extravaganza that shatters the fourth wall and glues it back together with turbo-charged storytelling and silliness. Spoiler alert: everyone dies at the end – including the audience!

Rated S for Stupid and strictly not educational

'One of the funniest introductions to Shakespeare imaginable.★★★★' Sunday Telegraph

'If you want your kids to have fun at the theatre and fall for all its magic, get them to a Listies show... Nobody else makes Shakespeare this fun.' Daily Review

As seen on The Listies Work for Peanuts on ABC ME.

Cast Richard Higgins, Matt Kelly + others to be announced.

Originally commissioned and first produced at Wharf 1 Theatre by the Sydney Theatre Company, 16 June to 17 July 2016