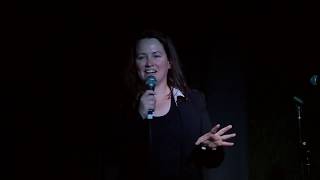 Who doesn’t want to learn how to get rid of a dead body? Join KC Martin-Stone, Australia’s premier Darwin-based archaeologist/comedian, for an intimate encounter with death. With eight billion people about to die in the next century, KC has all the options ready.

Described by Alice Fraser as “the leading voice in corpse-disposal comedy”, KC takes a lighthearted look at death. Or rather, what to expect when you’re expiring (sorry).

Whether you’re scared of death or fascinated by your own mortality, this show will answer all the important questions – How do different cultures deal with dead bodies? What’s the most environmentally friendly way to go? Who killed JFK? (Okay, maybe she doesn’t have all the answers…)

If you’re looking for a comedian who has both travelled the country doing the stand-up comedy club circuit for the last seven years, and won a world debating series on ethics in archaeological practice, you’re in the right place. KC also runs a heritage management consultancy that covers the Northern Territory, working with Indigenous communities and historical heritage, and works with GNWTV (Good News Week, The Glasshouse) to develop smart and funny TV.

KC ties in the factual with the personal in a mix of stand-up and storytelling. From seeing her first dead body, to dealing with death at work, this self-described "bogan dropout" rolls wit and sensitivity into her unique brand of gallows humour.

Loved by local Darwin audiences on stage, KC is also known as the ‘resident archaeologist and comedian’ on her regular ABC Radio Darwin segment.

If you like to get your geek on and nerd out over fascinating, taboo and underground topics, you’ll love this show.

'A funnel of knowedge, a force of personality, a bunch of punchlines and an hour of comedy that is completely different from anything else you’ll see on stage. Incredibly funny, a must see for this festival.' Alice Fraser