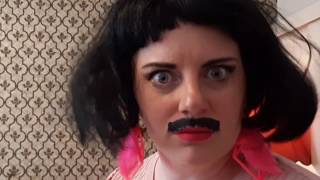 Nominated for the Golden Gibbo in 2019, Lauren Bok is back with a freshly-baked new show, golden crispy on the outside, filled with content of a questionable origin on the inside!

In order to reach 'The Top', chronic overachiever Lauren Bok has never chucked a sickie, never got a detention and never, ever paid for public transport.

When being too busy, working too hard and feeling exhausted all the time are all signs you’re doing it right, Lauren Bok reaches the top through a hilarious blend of stand-up, mime and burlesque, all to get the tasty pastry of perfection that awaits her.

'Her innate nuttiness and gift for physical comedy need to be seen live and up close. A sight to behold.' Herald Sun

'Wickedly funny stand up, she has the audience in stitches.' Pop Culture-y

About:
Lauren Bok is an award-winning comedian from Melbourne with over eight years experience in performance, radio and TV. She does mimes, burlesque, stand-up and silly voices.

She was nominated for a Golden Gibbo in 2019 for her show Rock Out With Your Bok Out, and her previous show Between a Bok and a Hard Place was listed as “Top 4 shows to see to feel better about the world” in The Guardian. Her debut show Is That A Burrito In Your Pocket Or Are You Just Happy You Have A Burrito toured to Melbourne International Comedy Festival, Perth FRINGE WORLD and Edinburgh Fringe, and won Best Emerging Artist (Weekly) Award at Adelaide Fringe in 2016.

Throughout her career she's enjoyed multiple sold-out shows, rave reviews, best newcomer lists (Pedestrian.tv and Broadsheet), as well as writing for SBS Comedy and The Age. She is also a children’s performer, with her character The World’s Worst Babysister, and co-hosts 'Elementary Springfield', a podcast exploring The Simpsons with fellow comedian Claire Sullivan.

'How does one even begin to explain how wonderfully funny Lauren Bok is.' Aussie Theatre