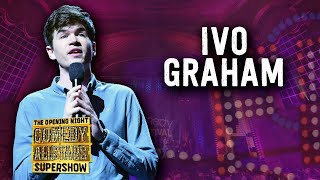 After having a whale of a time in the New Order 2018 showcase, plummy-voiced Englishman Ivo Graham flees the chaos being wreaked by his schoolmates back home to make his Melbourne solo show debut, with the hour that landed him a Best Show nomination at the Edinburgh Fringe.

A charming, beautifully crafted romp through young adulthood, new parenthood and the not inconsiderable faff of holding it all together. It’s a show for all ages and stages, from a nice young man who’s very excited to be back in your country. As seen on Mock The Week, Live at the Apollo and Have I Got News For You.

‘An irresistibly funny hour… has star-in-the-making coming off him like steam. ★★★★’ The Telegraph (UK)