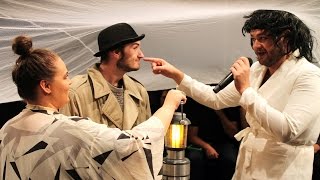 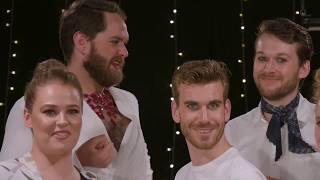 A 70-minute, guaranteed feel-good night. Expect plenty of laughs in the company of your mates, and some of the sassiest performers in town.

While the story of Jekyll & Hyde is well known,  A Slightly Isolated Dog tell it in a completely absurd, joyous and irreverent way.

Our shows are fast and furious, mashing up styles of sketch comedy, music gig, physical theatre and wordplay.

Jekyll and Hyde premiered at Circa Theatre Wellington in 2016 and has toured all over NZ and the UK.

'A high-octane, overly-charged show that defies many conventions of theatre.' Dominion Post (NZ)

'A style of theatre not ordinarily seen: playful, energetic, silly and spirited where having fun... is the main aim.' NZ Herald

'An absolute tour de force of modern theatre practice... No matter how dark you feel before you come, that darkness will disappear during this blackest, and sexiest of comedies.' Theatreview (NZ)

'[Jekyll & Hyde] displays some of the most gentle, loving and encouraging audience interaction that I have ever seen. These larger-than-life clowns ease us into the games they’re playing, making it feel like being involved is the most exciting thing in the world... joyful, positive, sexy, hilarious and clever. I wish I could stay for hours.' Pantograph Punch

Jekyll & Hyde is on the 2020 VCE Drama Playlist