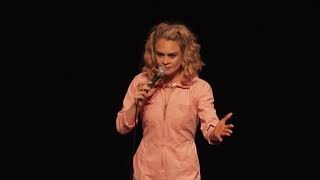 Joanne McNally burst onto the Irish comedy scene in 2014 and in less than a year became the co-host of RTÉ’s flagship comedy show, Republic of Telly, and sold out her first solo stand-up show in Dublin. Her one-woman autobiographical show Bite Me was nominated for multiple Dublin Fringe Festival awards and her 2019 show The Prosecco Express received rave reviews and sold out its Edinburgh Fringe and Dublin Fringe runs.

'One of the most exciting things to happen to Irish comedy in years.’ The Irish Times