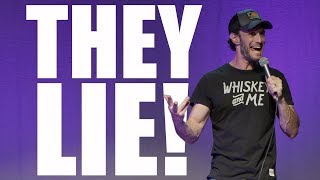 With the offbeat, personal and high-energy brand of storytelling humour that has seen him collect him upwards of two million followers and hundreds of millions of views on social media, US comedy superstar Josh Wolf is one of the most dynamic and sought-after headliners on the US comedy circuit.

The comedian, actor and New York Times bestselling author is a regular roundtable regular and writer on Chelsea Lately and After Lately, and has had recurring acting and writing roles on TV sitcoms including beloved cult classics My Name Is Earl and Raising Hope. He sold out shows all over Australia and New Zealand last year and now Josh is raring to take on our comedy festivals!

Funny, self-deprecating and brutally honest, Josh’s long-form, very relatable, silly, ridiculous stories about his adventures juggling a stand-up comedy career with single parenthood in Los Angeles have earned him a successful touring career across the US and Canada and a spot in the finals on NBC’s Last Comic Standing. And with more books, TV sitcoms and an Adam Sandler-produced screenplay in the works, rest assured you will be seeing a lot more of Josh!

With the type of charm that allows his sometimes naughty stories to come across as fun rather than mean-spirited, Josh stays away from political jokes – a lot of his hilarious stories are based around making fun of himself and his son. Don’t miss the prodigiously entertaining US comedy superstar as he makes his Melbourne International Comedy Festival debut – book early!

‘A down-to-earth comic and a master storyteller who excels at telling relatable and ridiculous long-form stories about his life. Unbelievably funny.' The Speakeasy (NZ)

‘An effortless storyteller, a master of the pregnant pause. Prodigiously entertaining.’ Super No Bueno (USA)