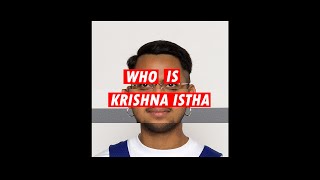 The Artist and The Milstead Company present

The Artist and The Milstead Company present

Turns out testosterone filled comedy isn’t what you thought!

Super smart politics meets some really silly props as Krishna dares themselves to some (pretty bent) straight talk at the stand-up mic: babysitting the woke way, is this McDonald’s or Grindr?, and don’t get them started on the toilets. Plus, the shocking truth behind the question: "What's in the bum bag!?"

Using avant-garde comedy and experimental theatre Istha tackles issues of stereotypes, hormone replacement therapy, sexual fluidity and the reality of living while trans head on with heart and humour.

‘The remarkable Krishna Istha.’ The Monthly (for Wild Bore)

‘Krishna Istha is cute, fiery and cheeky and has a lot to say on the subjects of queer culture and gender politics.’ Theatre du Jour (for Wild Bore)