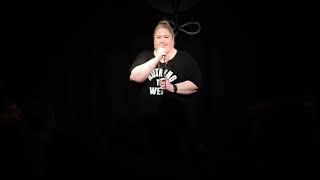 Kate Barron Made You Lick (CAN,UK)

Award-winning Canadian comedian, Kate Barron, is the brutally honest, unfiltered voice in your head. Kate fought (and partied) through her naive 20-something phase trying to find herself and came out the other side. Now in her 30s, she's a fiercely loyal woman with a strong bull s*** detector and the experience to back it up.

After a lifetime of being told she is too big, too loud and too vulgar by everyone from strangers to teachers, she decided to step on stage and start wearing those labels as badges of honour. Kate doesn’t do self-deprecating. She’s that confident friend you wish you had on speed dial when you need to be pumped up.

Growing up as the youngest in a big, busy household, Kate was often left to her own devices and got herself into trouble more times than she can count. What comes from a lifetime of trouble? Great stories! Full of hilarious and naughty tales of dating, sex and being happily childless, Kate doesn't believe in pulling punches and captivates audiences with her charm and high-energy performances.

'Her warmth and sincerity give her a special ability to connect with an audience.' Ian Atlas, Empire Live Comedy

Kate has toured across Canada, USA and the UK and was named one to watch by multiple national Canadian news outlets when she became the first woman to win the Toronto Comedy Brawl in its nine-year history, beating out over 400 other comedians.

She has been invited to perform in JFL42, Off Just For Laughs + Zoofest in Montreal, SheDot Festival, NXNE, SirusXM Top Comic Canada, HBO's Women in Comedy Festival in Boston, London's VAULT Festival and more. Her material is not family friendly or for the faint of heart, but it might teach you a thing or two.