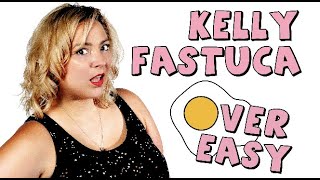 Kelly froze her eggs and she is way over easy.

A stand-up pro not for the faint hearted. Bring KFC.

As seen on ABC TV's Rosehaven and heard on ABC Radio and triple j.

Kelly Fastuca is an Australian-born comedian who was based in New York City from 2010 to 2016 and has played rooms there such as The Comedy Cellars Fat Black Pussy Cat, The Stand, Stand up New York and Carolines.

She gigs regularly around Melbourne and has guested on shows that include Frocking Hilarious and as a cast member of Geraldine Hickey’s That’s My Show for the 2018 Melbourne International Comedy Festival, and is the host of the successful podcast 'Worst First Dates.'

She has worked on TV shows such as Rosehaven (ABC), The Logies (Channel 9) and Out of the Question (Channel 7) and guested on podcasts including 'Don’t You Know Who I am?', 'I Love Green Guide Letters' and 'Keith and the Girl'.

In 2019 she froze her eggs. You won't like this story if you hate needles but should come if you like KFC.

‘One to watch and be surprised by.' Herald Sun