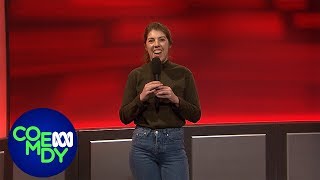 Alex Ward Sorry For Before

Alex Ward Sorry For Before

Alex was born two weeks late and is pretty sure her first thoughts were "sorry I’m late, I won’t be long".

Alex feels like she’s grown up and finally stopped apologising when she doesn’t need to, although she is sorry about all the times she did it before.

Alex is the funniest she’s ever been, mostly because she has nothing to apologise for. This is sure to be her best show yet.

As a QLD’er living in Melbourne, Alex is always cold, which makes the warmth she brings to the stage all the more impressive. With personal, engaging and punch-line heavy comedy, Alex is one of Australia’s fastest rising up-and-comers.

By day Alex is a writer for Network Ten’s The Project.