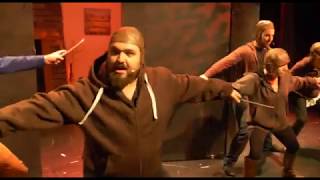 Armed with razor-sharp wit, warped rhymes and twisted storylines – this is the Game of Thrones musical parody you've been dying to see.

What do you get when you mix a wickedly talented cast, a global phenomenon television series, showtunes and a twisted sense of humour?

Answer: a critically-acclaimed, witty send-up that all Westeros fans can indulge in. Set to a side-splitting original score and incorporating highlights from all seasons, Thrones! The Musical Parody celebrates all the nudity, violence and vulgarity you know and love.

Whether you're a long-time fan keen to see all your favourite characters in a completely new light, or a member of the uninitiated just wanting to understand the hype, this is not to be missed.

'So much better than it ever had to be.' ThreeWeeks (UK)

'A hilarious romp for both diehard GOT fans and casual viewers… if there even is such a thing!' Australian Stage