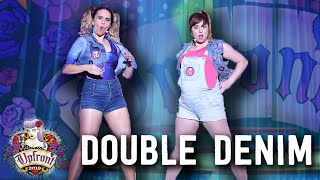 Festival favourites Michelle Brasier (Mad As Hell, Aunty Donna) and Laura Frew (Fringe Wives Club) present their coming of age story in three parts. Like the Harry Potter play but with crabs. The return season to return all seasons.

Double Denim (Thu), Adventure Show (Fri) and A Very Fancy Dinner Party (Sat) were designed as a trilogy. If you missed one over the years it’s your chance to see that one. If you didn’t, do yourself a favour and watch them in order 'cos we have been hiding Easter eggs in these bad boys for years. There is a disgustingly theatre school through line in these little silly plays and we’d love you to come watch and go “Oh wow did they go to NIDA?” No. We didn’t get in. All these shows have sold out seasons so we got a bigger room. Don’t make us look like (tryp)dicks.

TrypDick package
Buy a ticket to all three shows for $65 (plus booking fee).

A Very Fancy Dinner Party: Sat 28 March, 4 & 11 April
'Come Dine With Denim' as two idiots dazzle you with their grown-up-ness and watch it all come crashing down in a rain of tomato sauce and shame.

'Double Denim have all the trappings of the next big comedy duo. ★★★★½'  The Music

'There’s a whizzing sense of fun and chaos — it’s one of the only shows this year without a dull spot. ★★★★½'  Herald Sun