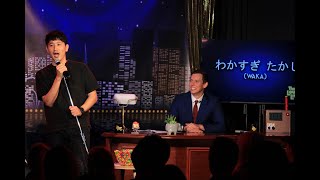 Japan's quickest comedy export, Takashi Wakasugi returns to Melbourne with his brand-new show after a sold out season at the 2019 Melbourne International Comedy Festival.

A typical Japanese boy, Takashi came to Australia on a working holiday visa and had a wonderful time. Did you know, if you are on that visa and spend three months doing farm work, you can get a one year extension? Takashi did that.

For three months, Takashi worked on a countryside farm with a (not) racist farmer and stayed at a (very) dirty backpacker hostel with crazy backpackers. Takashi had a great time and the worst time there. He will talk about that. And he just wants to say Thank You (F*%k You) Australia!

'Hilarious... a genuinely charming performer... His show will be a treat to all who come to see it. ★★★★' Everything Adelaide