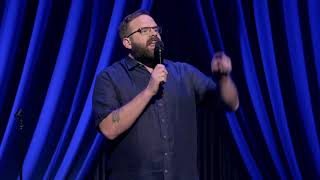 This Might Not Be Hell is a one-man play about life on the dole. Set in 2004 and based on true events, this story covers the boredom, depression, financial struggles and the near-constant diarrhoea of living day to day as an unemployed person during the Howard years.

Based in the town of Pauline Hanson's fish and chip shop, it is an honest look at what it's like to be dirt poor in Australia and how the welfare system wears you down until you just wish you were dead. It'll be a laugh riot!

Greg is one third of comedy podcast 'The Grub' with Anne Edmonds and Ben Russell. He’s been seen on ABC’s At Home Alone Together, The Weekly, Rosehaven and Get Krack!n.

'Greg is actually the funniest and you don’t even realise!!? He’s my favourite comedian.' Anne Edmonds