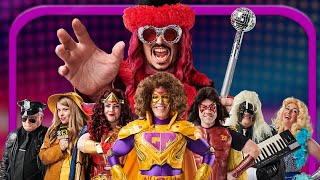 IN PERSON
The Butterfly Club presents a Comic Genius Production

IN PERSON
The Butterfly Club presents a Comic Genius Production

Groovyman is a family-friendly superhero comedy set in the last days of disco from the team behind successful Melbourne International Comedy Festival productions Robin Hood: The Untold Story, Live and Let Spy, You Only Laugh Twice and Dead Men Tell No Jokes.

Can Groovyman, his sidekick The Boy Funkster and ace reporter Bonita De GoGo stop a rogue’s gallery of supervillains including The Hustler, Polly Esther and The Piano Man from destroying FunkyTown against the backdrop of some classic disco hits from the late 1970s.

With Groovyman, you’ll believe a man can jive!

'Words such as "brilliant" and "hilarious" do not even come close to describing this show – nor for that matter do the words "gazebo" or "Rastafarian".' Shaun Micallef

Please note, the following performances will be filmed: Sat 10 Apr.
10+
Suitable for audiences 10+
BACK TO LISTINGS