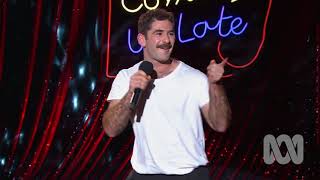 He’s won multiple awards, sold out festival seasons and now he's back home, fresh from a virus-ravaged UK to perform for the first time in a year. Lucky he has his one-piece crotch-cut polo.

If you’ve never seen a Josh Glanc show they’re ‘absurd and dynamic’ (Fest Mag), ‘exciting, chaotic and unpredictable' (Edinburgh Festival Mag). They're critically acclaimed, furnished with props, costumes and musical cues, and ‘indisputably energising’ (Herald Sun). Until COVID killed comedy he was causing a stir in the UK. Now he's back and 'defiantly one to watch' (The Age).

As seen on ABC's Comedy Up Late, Channel 10, Mr Box (UK) and the BBC (UK), don’t miss this 'master of craze’ and ‘joyous purveyor of stage oddity’ from the ‘ex-lawyer turned law unto himself' (The Guardian, UK).

‘The obvious reference point is his fellow Australian Sam Simmons... Both revel in the nuttiness of what they’re doing on stage, defying audiences to make sense of it. ★★★★’ The Guardian

‘Josh Glanc is an hour of out-loud laughing with the delicious uncertainty of what the heck is coming next. ★★★★' Adelaide Advertiser

‘An extraordinary show by an extraordinary talent... He plays with borders and boundaries  – between love and hate, performance and reality  – and it is absolutely gripping. ★★★★' The Scotsman

‘Glanc’s style is absurdist, sometimes just plain silly, but there’s an intelligence to it that belies the apparent simplicity. ★★★★★’ The West Australian