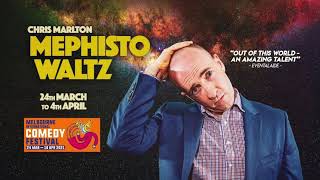 Mephisto Waltz opens with Mama America, a 17,000 year old Kentucky woman who remembers everything that’s ever happened… to everyone!

Second act is Davy Bluetooth, the world famous rapper, writer, poet, playwright and hyper-environmentalist. Davy talks about his childhood, his career and how we can save the planet.

Next, Rob-rob Anthony, motivational speaker. Rob-rob’s monolithic enthusiasm and freight-train charisma overshadow his constant inability to reach a conclusion, explain a metaphor or define the purpose of any instruction.

Fourth is Simon Thröpp. life hacker, body hacker and the first fully optimised human being. His website www.thröpptimisation.com is home to thousands of life and body hacks and his universally acclaimed online bookstore. Simon’s clever nonsense and focussed silliness will bring rhythm to your breath and purpose to your life.

We’re very lucky, at number five, to have New York City club comic, Marlon M’Logne. Marlon’s confidence wins hearts and his effortlessly funny opinions win minds. The stories he tells are impossible to predict, but his stagecraft and delivery leave you in no doubt that you’re in good hands – he’s a professional.

Sixth is Gareth Mosley, Australian entrepreneur, podcaster, comedian. Gareth always lets you know when to laugh and is determined to discuss the subjects that you’ve all heard before. As he stumbles across poignant punchlines and strangely coherent thoughts, you’ll notice that he isn’t quite aware of what he’s saying or how he’s reaching the conclusions he does.

Out of this world... an amazing talent - Eventalaide
16+
Suitable for audiences 16+
BACK TO LISTINGS