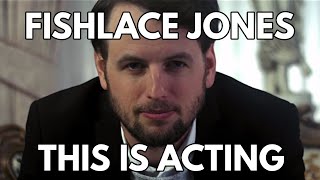 Fishlace Jones The Entire History of the Theatre in 43.7 Minutes

Fishlace Jones The Entire History of the Theatre in 43.7 Minutes

It's not Multiple Personality Disorder,
it's a Bachelor of Arts in Acting... and Fishlace Jones has five of them.

Get your Inner-Child ready for the Entire History of the Theatre in a whip-lashing 43.7 minutes.

Did you know?
The Town of Bourges had a play that ran for 40 days. That's as long as 8 full Test Cricket matches. Scintilating.
In the Middle Ages, special effects were coming into their own, to replicate burning down a house, you'd burn down a house.
Aeschylus' play Eumenides was so frightening that several women in the audience miscarried...several.

Fishlace Jones is back baby to refill the empty well of theatre that was 2020. And what better way to do that than to cover it all!

'Not only witty, but insanely quick in delivery.'
Theatrepeople

'Masterful in his comic delivery and timing.'
WeekendNotes