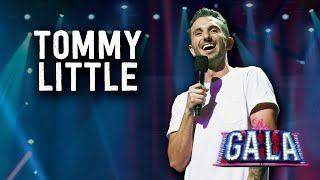 Tommy Little I'll See Myself Out

Tommy Little I'll See Myself Out

Extra week of shows added due to popular demand.

Tommy Little is Australia’s premier d*ckhead. Which is lucky for everyone else, as d*ckhead decisions make for big laughs!

Nothing is off limits at a Tommy Little live show – his real-life antics and setbacks are foolish, funny as hell and definitely his own fault.

After touring around the country Tommy is finally bringing his hit show to Melbourne for a hot night of comedy that only he can deliver.

As seen on The Project and heard on Hit Network's Carrie & Tommy.

'Little can’t be faulted and the show ends with an hour somehow feeling like seconds. ★★★★★' Adelaide Advertiser

Please note, the following performances will be filmed: Sat 10 Apr.
16+
Suitable for audiences 16+
BACK TO LISTINGS