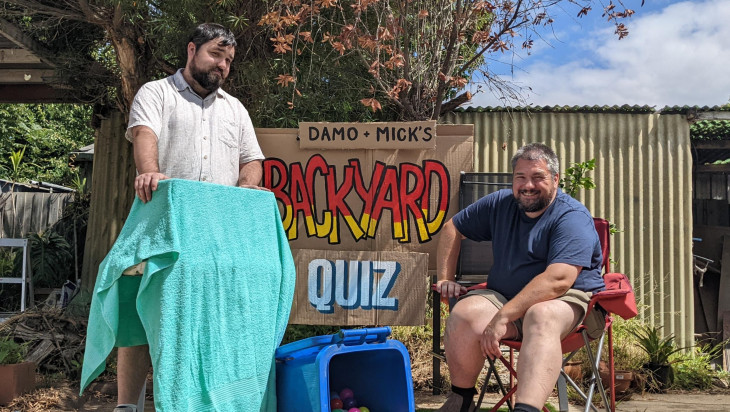 All the greatest games throughout history were conceived in backyards. From lawn bowls to backyard cricket, from lawn darts to goon of fortune, all the best games owe their origins to someone sitting in a backyard and wondering aloud amongst mates, "y'know what'd be fun?"

And so it was, when mates Mick and Damo caught up for a beer or 17. They hit upon a concept; an idea that would become the greatest comedy/quiz/panel show the world had ever seen.

This isn't that one, but hey they're on a budget.

Come and see the comedian contestants battle their wits against tepid-fire question rounds, face off on the Wall of Ducks and try and snatch victory from the terrifying Jaws of Defeat. All for the ultimate glory of winning one of the sensational prizes that Mick salvaged from hard rubbish.

If QI were significantly dumber; if Spicks and Specks were less musical and more incompetent; if Good News Week had sets made of cardboard and duct tape, this would still probably not be that.

But they're having a go, and that's  what's important.

'Laid-back quiz with all the charm of Spicks and Specks at a BBQ.' Theatre People