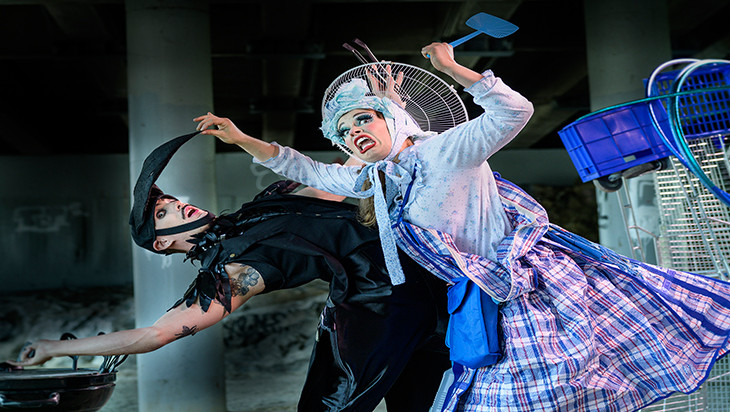 IN PERSON
NICA Represents are proud to present

IN PERSON
NICA Represents are proud to present

A suburban family of eccentrics have travelled on foot from the east (the Dandenongs) to settle in the west, the long-promised land of Sunshine.

Like bowerbirds, Nan, Jan, Mindy and Scot have been collecting blue hard rubbish from the nature strips along the way – blue clothing, blue baggage, blue utensils, a barbeque, not one but two blue shopping trolleys, all piled in a full-sized blue box-trailer!

However, the local bureaucratic ravens consider this gaudy traveling junk-show as a territorial challenge and swoop down to patrol the borders and if necessary send this family back to where they came from – the east ... Dandenong.

Mayhem ensues, and the show descends into an absurd vaudevillian circus street-battle for freedom!

Made as a comic circus response to our collective current circumstances – social distancing, borders opening (and closing and opening again!). The world needs a show that can be performed literally anywhere, that meets an all-ages audiences where they are – socially distanced and outdoors!

After two years of lockdowns, this show celebrates getting together again for live entertainment and comedy! It reignites the shared experience of performance through inclusive audience interaction, circus spectacle, inventive production, costume design, upcycling and recycling found objects.

With an extraordinarily broad range of ridiculous and jaw-dropping circus and performance skills between them, this is an all-ages comic street-circus battle of a hundred skills!

Raven Mad is aimed squarely at the broadest possible all-ages audience. This is a shared celebratory, spectacular and comic event in an unexpected outdoor setting. We consider ourselves part of a global movement to democratise theatre and make live performance culture more accessible to all-backgrounds, all-ages audiences who may feel excluded by 'high'-culture, high ticket prices, exclusive indoor ‘arts’ venues or culturally inaccessible traditions. This is spectacular, funny, skilled circus-theatre for everyone!