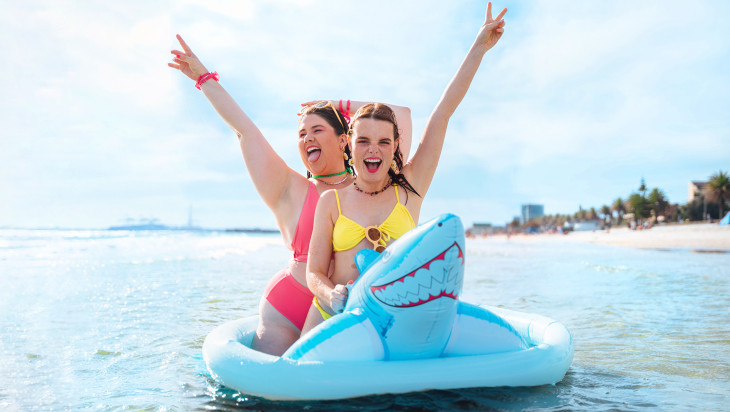 All aboard you gaslighting girl bosses to the cruise that defines the spirit of the seas!

Heave ho (and hoes!) ‘tward the party cruise of a lifetime and pay your respects to the almighty… Spirit of Tasmania. For all those who wish to feel the salt in their eyes, wind on their tits and semi-stale fish fingers in their gob, this is a ship that does not discriminate. The prosecco is warm, the mattresses are Cruskits and the arancini’s a god damn gobstopper, but hey, your wristband’s tight, your g-strings tighter, your car’s on a boat! (incredible!)  and you’re smellin’ like a coconut’s armpit all the way from Port Melbourne to Devonport.

After a smash-hit sold out tour of No Hat, No Play! The Cabaret! and being coined "the future of Australian comedy" (Herald Sun), queer musical comedy duo Samantha Andrew (TikTok star, Green Room award-winner) and Mel O’Brien (not-a-TikTok-star and not-a-Green-Room-award-winner) are back with their brand new comedy cabaret for the 2022 Melbourne International Comedy Festival.

Featuring a smorgasbord of sketches and an all original soundtrack with songs including ‘Me n’ My Wonky Tit’, ’That’s How I Died in IKEA’, ‘Depop Piss Pot’ and ‘Lifeboats Are For Women and Children (sha la la la)', this show is bound to be the longest ‘yeah buoyyyyyy’ in history!

So in the name of the son, the ghost and the Holy Spirit herself, plunge into that murky kid pool, you Australiana opal-bedazzled sister! Let your captains Mel & Sam do the rest, 'cos it’s high tide (and high time) to get SHIT-WRECKED!.

'Just waiting to be eaten up by a Broadway director.' SYN Media