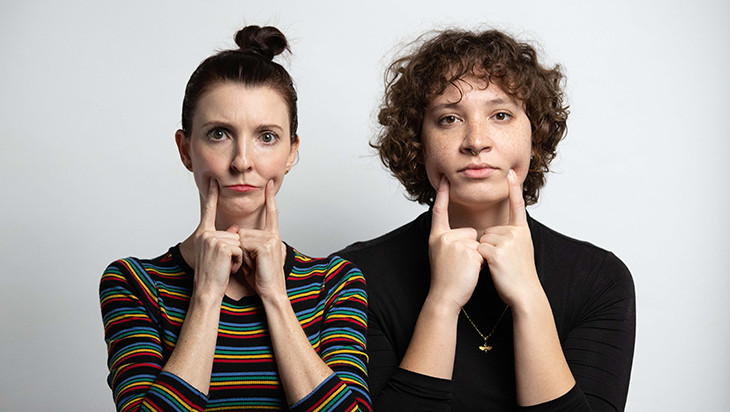 Bea and Fiona are optimistic ladies who have been told that they seem anything but. On opposite ends of the Millennial spectrum, Smile More! is something Fiona and Bea have been told too many times to count. From friends, family, tradies, even the boss, these affably cynical women have been encouraged to crack a smile every once in a while, even though they’re actually really friendly people! If they had a dollar for every time someone said, Smile More! they wouldn’t have to do this show!

With Fiona’s dry and whip-smart jokes and Bea’s charmingly manic insights into her own mental state, they’ve decided to join forces to show you their best bits!*

(*industry term for jokes, we’re not flashing you)

Bea Barbeau-Scurla is a stand-up comedian, screenwriter and producer. She is a regular face on club line-ups all over Sydney and Melbourne and has opened for legendary acts such as Wil Anderson and Geraldine Hickey. Her voice has been described as manic, unique and sharp. Darkly funny and disarmingly beautiful (her secret is she’s mixed race, which is very trendy right now), Bea is a powerhouse and absolutely one to watch!

'Barbeau-Scurla is a force to be reckoned with that would make most male comics run crying home to mum... If you’re a depressed, anxious bisexual – Bea Barbeau-Scurla has got your back. Bea makes being sad and irreverent look easy, and most of all, enjoyable.' On The Town

A two-time RAW Comedy State finalist, Fiona Cox is a stand-up comedian and advertising copywriter. After a decade in the ad industry, she has the writing chops to show for it and a good amount of cynicism. A regular on the Sydney scene, she has performed at some of the most prestigious venues in the city. Often described as very dry and extremely clever with a gift for concocting sharp, insightful material, this straight-faced jokester is definitely on the rise.

'Fiona does straight-faced cynic better than almost anyone.' Chuck Moore Reviews About