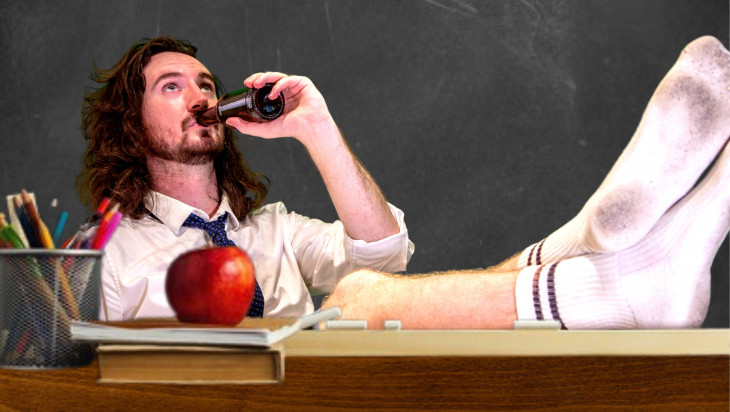 Ty Gray Those Who Can't Do

Ty Gray Those Who Can't Do

Ty's not afraid to say it – a few things didn't work out the way he thought they would, and now he's a teacher.

As a new teacher, Ty has a unique perspective on the profession and almost every day has to stop himself from saying "I was your age not that long ago, morons". Starting his first teaching gig has shown Ty that if he doesn't want to grow up just yet, he'll have to be Dr Jekyll during the week and Mr Hyde on the weekend, so that students don't discover his love for boozing, partying and telling stories on stage about his questionable lifestyle choices.

Ty is a comedian originally from Melbourne, but who has been living in Darwin for the past year. After dipping in and out of comedy in Melbourne from 2014 onwards, he finally started to take comedy more seriously in 2019 and was starting to hit his strides right before COVID-19 hit. To take refuge from COVID-19, Ty moved to Darwin and quickly started to make an impression on the local comedy scene.

Earlier this year, Ty was preparing for his first show in the Darwin Fringe Festival, which was eventually cancelled due to a short lockdown in Darwin. As an alternative, Darwin comedians managed to put on a week of shows in a local venue in what was dubbed the 'Fringe of the Fringe'. During this week Ty sold out a solo show and a split bill featuring another Darwin comedian.

Ty's first solo-hour is a culmination of his first seven years (on-and-off) in comedy, and mostly revolves around him balancing his career as a teacher and his personal life as a juvenile delinquent.

'Ty charms with his well crafted one liners and loveable anecdotes.' Off The Leash