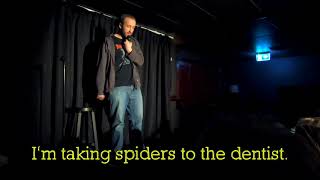 – Mama America will take you on a trip down memory lane, reminding you of all the great times you’ve somehow forgotten– there are ghosts, aliens and wild horses. You won’t forget these stories… again.

– South London playwright, poet, rapper, producer and omnivore Davy Bluetooth has dragged himself up from the gutter. Between sold-out stadium tours, this coffee-loving insomniac finds time to save the planet, and his own sanity.

– Crash courses in dream realisation don’t get any more actualised than with Hyper-Motivational super-speaker direct from the United States, Rob-Rob Anthony. He’ll align your heart, your mind and your body in record time!

– And with Sir Egbert Cuthbert, royal historian, you’ll see behind the curtain of the British Royal Family, including eye-popping secrets that are beyond belief. How is Queen Elizabeth so old? Why do we all love a Royal Wedding? And who is Charles and Diana’s secret third son?

Chris Marlton brings characters to life, and life to characters. With amazing stories, non-stop laughter, and calls for revolution… or at the very least a reminder to sign an online climate change petition.

Chris has performed in sold out shows at the Canberra Comedy Festival and Melbourne International Comedy Festival. As he tours Bin Juice around the nation in 2020, don’t miss seeing him live.

'Chris has an amazing talent with bringing these characters to life and impeccable accents to match.' Eventalaide