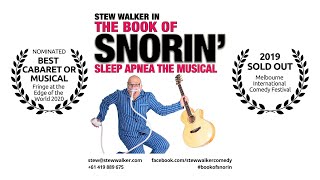 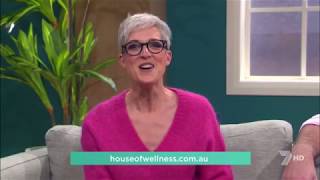 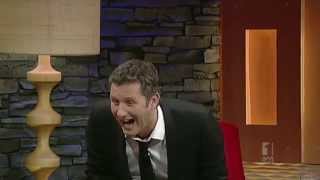 Stew Walker The Book of Snorin' – Sleep Apnea the Musical

Stew Walker The Book of Snorin' – Sleep Apnea the Musical

After a completely sold-out debut season at the 2019 Melbourne International Comedy Festival, the world’s first comedy show about sleep apnea is back by popular demand for two nights only.

If you snore or love someone who does, Stew Walker’s show featuring ‘Stewpid’ songs about snoring and sleep apnea will not only amuse you, but it could save your relationship or even your life!

Stew Walker has sleep apnea and snores a LOT! His snoring is so loud that his wife has kicked him out to the bungalow and the neighbours have lodged noise complaints with the police. And sleep deprivation is causing havoc at work, where Stew nods off more often than a bored parliamentarian.

But it’s not all bad news. For one thing, he’s saving heaps on drinks. Thanks to sleep apnea, he wakes up feeling hungover every morning despite not having touched a drop for months. And the noise from Stew’s snoring has scared the local possums away from his leafy eastern suburbs block.

The Book of Snorin’ - Sleep Apnea The Musical follows Stew on his quest to treat his sleep apnea and escape the bungalow blues.

Along the way he discovers a new cause for sleep apnea, encounters a new type of zombie, confuses doctors with his heart problems and discovers that it’s easier finding the right mask if you’re a superhero.

Stew Walker began his comedy career in 2012 when he was discovered by Adam Hills on his talk show Adam Hills in Gordon Street Tonight (see clip).

He was in the studio audience thinking he was just going to see the show being recorded. But on national TV Adam called his bluff about wanting to be a comedian when he revealed that Stew’s 'bucket list' wish to do a show at Melbourne International Comedy Festival was about to come true.

Six weeks later Stew made a successful comedy debut to a packed room at Melbourne Town Hall with a 30 minute show of original songs, including a live cross to Adam back in the studio (see clip).

Since then Stew has gone on to win new fans at comedy clubs across Australia and Asia, and produce hit solo shows The Book of Snorin' - Sleep Apnea the Musical, A Hard Days Night of Beatles Parodies and Live, Love, Laugh. He has also produced and performed in 1 Night Stand: A Musical Comedy Showcase, All Star Musical Comedy Showcase and Father’s Day Funnies.

‘Hilarious take on the noisy world of snoring.’ What Did She Think