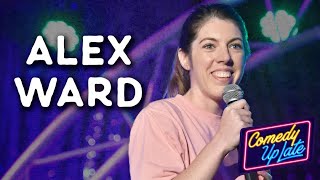 Alex Ward As You Live And Breathe

Alex Ward As You Live And Breathe

2020 was a year for reflecting… mostly my own face in the laptop screen in bed.

I reflected on society, my dreams and how hard Zoom tried to ruin live comedy forever. Turns out they couldn’t touch us because we’re back. Can you believe it? Me, in the flesh, as you live and breathe!

Despite the lockdown, I managed to achieve some great things in 2020. I wrote and co-starred alongside my dogs (my dogs were the leads) in a sketch for ABC’s At Home Alone Together series.

I appeared in Melbourne International Comedy Festival’s The Stand-Up Sessions.

I also baked not one, but two incredible cheesecakes. You could say it was a baking-pan-demic (that is an example of the kind of jokes you won’t be seeing at my show. It was a test, if you enjoyed that please re-think what you want to get from your life).

A little more about me:

As a Queenslander living in Melbourne, Alex is always cold, which makes the warmth she brings to the stage all the more impressive. With personal, engaging and punch-line heavy comedy, Alex is one of Australia’s fastest rising up-and-comers.

'Her delivery is spot on.' Adelaide Advertiser