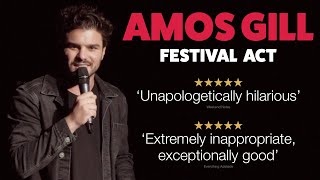 He’s one of Australia’s favourite comedy sons – in equal measures hilarious, challenging and original. Amos Gill’s comedy has won fans and accolades across Australia and the USA.

Award-winning comedian Amos has conquered Australia’s comedy scene and is currently one of the hottest new prospects on the US Comedy circuit. The former ABC TV and breaky radio host has played the Sydney Opera House and Madison Square Garden, performed in multiple countries touring with Jim Jefferies, and hosted Adelaide’s breakfast show for Australia’s biggest radio broadcaster.

You’ve seen his stand-up on TV like Just for Laughs’ Australia: Live (filmed at the Sydney Opera House live for the Comedy Channel) and the biggest showcase of the Melbourne International Comedy Festival, The Opening Night Comedy Allstars Supershow.

Don't miss Amos’ brand-new hour of red-hot stand-up. If you're in need of a comedy Sheeple's Champion – Amos – is (possibly) your man.

‘One of the most enjoyable solo acts on the festival schedule, Gill’s gift for vivid description elicited long peals of rafter-shaking laughter from his packed crowd.’ Herald Sun

‘Utterly hilarious… had the entire audience swinging their heads back in laughter. ★★★★★’ Everything Adelaide

‘From cringe to cackle to straight-up belting out laughter… one of Australia’s most prolific and celebrated young comedians, Amos knows he’s here to make a crowd laugh hysterically.’ In Review