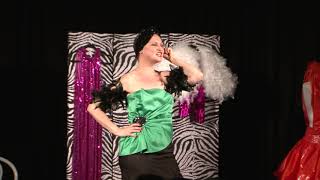 Dahlin! It's The Jeanne Little Show

Dahlin! It's The Jeanne Little Show

Written and directed by award-winning Melbourne playwright, Kieran Carroll, Dahlin! It's The Jeanne Little Show is a moving and hilarious tribute to one of Australia’s most loved entertainers. The show is performed with great aplomb by Melbourne performer Caroline Ferguson.

Gold Logie winner, Jeanne Little, rose to prominence in 1974 when she began regular appearances on the extremely popular The Mike Walsh Show. After becoming the most popular woman on Australian television in the mid-70s, Jeanne’s talents and career blossomed in numerous ways. From many other appearances on numerous TV shows, to starring in the hit musical Jerry Girls, to singing for Princess Diana and Prince Charles at the Sydney Opera House, to worldwide touring shows playing Marlene Dietrich and Marilyn Monroe, Jeanne Little’s contribution to Australian entertainment is immeasurable.

Jeanne’s humble beginnings raised by a single mum, her youthful years in London, her successful and loving marriage to interior designer, Barry Little, the many famous people she met along the way and her attempts to be both mother and TV star are all delightfully covered. The stories are wrapped in warmth, with Jeanne’s own brand of zany and irrepressible humour always present.

Dahlin! It's The Jeanne Little Show is a fantastic show for all ages that remembers all that this remarkable woman achieved. It brings a smile, a laugh and joy to everyone.

'Ferguson is great...Dahlin is a touching tribute to Jeanne Little' My Melbourne Arts