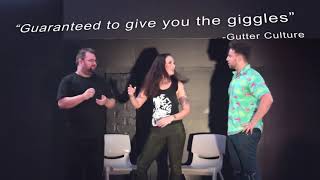 What happens when you cross the hottest, rudest party game of the last decade with the sharpest minds that the Australian improv scene has to offer?

You get Improv Attacks Humanity – improv for the awful.

Armed with what can be at best described as a politically incorrect card game and at worse an offensively brilliant premise, the cast are truly at the whim and fancy of the audience – you dictate the show that you want to see.

This is high stakes improvisation where the line will not only be walked but trampled and curb-stomped. Watch as the cast use their improvisational know-how to punch up and explore the insane propositions that the card game and audience come up with.

Throughout the first half of the show this diverse and talented cast of performers will enact scenes inspired by audience suggestion and the internationally acclaimed game Cards Against Humanity. The second half of the show combines the several rounds and explores the insane world that has been created in the first half. Every show will be different, unique and an exciting experience for audience and performer. Nothing is planned in advance, everything is made up as you see it.

This show is back and rebranded courtesy of a law suit with Cards Against Humanity.