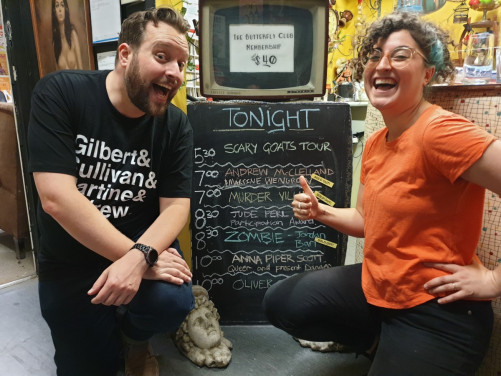 IN PERSON
The Butterfly Club presents a Rapturous Productions production of

IN PERSON
The Butterfly Club presents a Rapturous Productions production of

An exuberant hour of musical comedy written for a cast of 90, performed by a cast of two.

Award-winning comedian (and celebrated international DJ) Andrew McClelland foolishly spent 2020 writing a full-length, full-cast modern comic operetta based on the musical clichés and ridiculous plots of Gilbert & Sullivan (but with the pesky sexism and colonialism removed, LGBTQIA+ themes inserted, and all the style, ridiculous fun, comedy and catchy songs retained).

At three hours long and a cost of millions, that show will never be produced, but that isn’t stopping Andrew!

Joined by his over-talented, ever-eager co-performer Martine Wengrow, Andrew is determined to bring his musical vision to life! Within the bounds of a festival show setting.

This loving spin on G&S tells the tale of a lovelorn corporate law-firm IT department seeking unlikely glory in their inter-firm, intra-gender footy comp. Love will bloom! Tempers will flare! Footballs will get kicked! Jaunty little dances will be done! And absolutely everybody will get married in the finale. It appeals to both the passionate G&S fan and those with no idea what a "G&S" is.

After a sold out season at The Butterfly Club in 2021 this further improved little dynamo of a show is ready for 2022!

'Sundry highlights are strappingly sung... Clever musical arrangement, strong vocals, and McClelland’s high-spirited hamminess only adds to the hilarity in an hour of musical comedy that even the most exacting purist will concede gives Gilbert & Sullivan an outrageously silly modern gloss.' The Age

'He is both Jeeves and Wooster. His goofy, fun-loving personality is undercut by a sharp wit and craftiness... The material is all top notch. ★★★★½' Beat Magazine

'You'd be hard pressed to have more fun in any other Comedy Festival show. ★★★★' The Age

Andrew is a renowned comedian and DJ based in Melbourne. He regularly performs at Melbourne International Comedy Festival, where he’s received rave reviews from The Age and the Herald Sun, and has been awarded Melbourne’s coveted Comedians’ Choice Award, as well as Sydney Comedy Festival’s Jury Prize.

Andrew has written and co-written 16 hour-long comedy shows including Tie Her To The Tracks (2012 Moosehead recipient), One-Man Stand (2012 Crikey's 'Best of the Fest' award), A Somewhat Secret Secret Society Show (2009 with Lawrence Leung) and A Somewhat Accurate History of Pirates (1550-2017) (2004 Piece of Wood Award).

Past television appearances include Spicks and Specks, Sammy J's Playground Politics, The Chaser’s War on Everything, Comedy Up Late, Tonightly and Sammy J and Randy in Ricketts Lane.

As a DJ, Andrew’s reputation is superlative, having toured Australia and New Zealand as Cher’s official support act. He’s DJed at festivals all over the world and runs his own very successful club night, Mr McClelland’s Finishing School. Who’d have thunk he’d be into Gilbert & Sullivan so much!?

A pianist and composer from a young age, Martine holds an Honours degree in music composition from the Melbourne Conservatorium of Music, as well as a teaching qualification from the Yamaha Music Foundation.

An avid conductor, arranger and voice educator, she has taught or musically directed for Victorian College of the Arts, Federation University, Box Hill Institute of TAFE, the Defence Force School of Music and the Melbourne Conservatorium of Music.

Martine’s writing experience is broad, from having modern classical compositions workshopped by Melbourne Symphony Orchestra, to preparing and editing scores for big-name musical productions Muriel’s Wedding – The Musical and the recent Storeyboard Entertainment touring production of Chess.  She regularly arranges and orchestrates for such television programs as Dancing with the Stars, The XFactor Australia, and Name That Tune for FOX Broadcasting USA, and performs frequently with comedy improv troupe, The Big HOO-HAA!.

Her recent theatre credits include musically directing, arranging and orchestrating countless professional and touring productions, most recently as Assistant Musical Director for the national tour of Chess.

The Very Model of a Modern Major Musical is Martine's on-stage performance debut, appearing as Andrew's co-performer and accompanist. She also arranged and orchestrated the show's music. She's probably over-qualified to be in this show, but please don't tell her that.