We can’t quite believe it either but registrations are now open (and close in two weeks) for the 2020 Melbourne International Comedy Festival!

As artists prepare punchlines and nut out new material, we have asked a few Festival fans and favourites for their inside scoop… What have they heard and who do they want to see… Will we see Michelle Brasier's dog form a comedy duo? Is Geraldine Hickey right - will Zoë Coombs Marr and Rhys Nicholson get a divorce? Anything could happen!

So if you want the hot gossip and speculation from the artists themselves, check it out here!

Aaron Chen: The reviewers, then they could know what it's really like. And I could go to their shows and just scoff the whole time.

Becky Lucas: Honestly, I'd love to see Bindi Irwin get up there and give it a go, she's had a massive year and I really need some answers... for example, how does one simply just 'get engaged' at the age of 21?

Judy Horacek: The logistics might be a bit tricky, but if the Festival could get the fabulous redheaded comedian Lucille Ball doing the grape-stomping sketch, the one where she gets into a grape fight with another woman, I’d go and see that several times. (Yes, I do know she is dead. I said the logistics might be tricky.)

Heard any gossip about who might be doing a show in 2020?

Becky Lucas: Nobody tells me any gossip because I have the loosest lips in town. I cannot physically hold on to a secret longer than 4.5 seconds or I start to wither, so no I have not heard any gossip.

Judy Horacek: Maybe a certain female cartoonist with a slide show, although I might have dreamt that.

Geraldine Hickey: Well I know Kit Richards has received a Moosehead and if her previous show 'Wool: The Musical' is anything to go by it should be pretty spectacular.

Who would you most like to see team up and become a comedy duo for the 2020 Festival?

Michelle Brasier: Laura Frew and I (Double Denim) have grown up and gotten dogs now so I’d really love to see the two of them doing some sort of double act where they do tricks and learn how to bathe themselves etc. Cute and FUNCTIONAL. Also, I always want more of Tom Walker and Demi Lardner.

Becky Lucas: Probably the guy who plays pots and pans outside of the town hall and the guy who dresses like a bunny and plays the electric guitar a bit further up on Swanston Street. I think if those two guys got together, it could be something really magical.

Damian Callinan: I think I'd like to see Nina Conti do a whole show with Sam Simmons as her ventriloquist dummy. 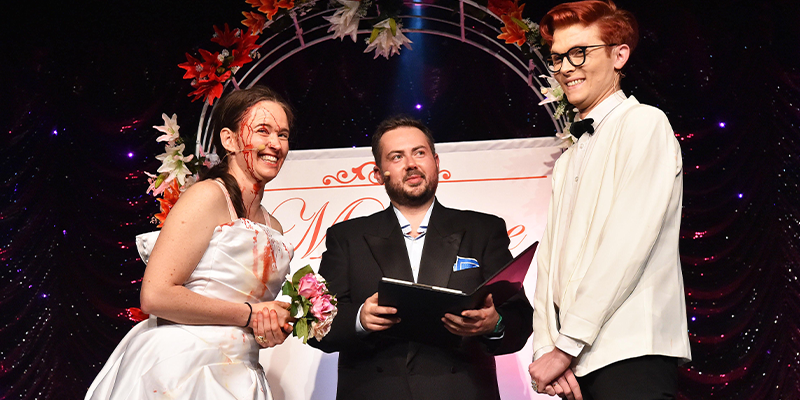 Zoë Coombs Marr and Rhys Nicholson at The Wedding, 2016.

Outside of shows themselves, what would you most like to see at MICF 2020?

Damian Callinan: Rather than comics on the side of trams, I'd like to see comedians driving trams. We could hijack the decommissioned restaurant trams for a show, dinner and commute special.

Geraldine Hickey: I’d love to see an inflatable slide put in at The Festival Club at Max Watt's from the upstairs bar to downstairs. Bit of fun and also a top notch exit strategy for awkward conversations.

Finish this sentence:
What I’d like to see at the 2020 Melbourne International Comedy Festival is…

Aaron Chen: More debauched behaviours and exciting and dangerous ideas in shows and at the festival club bar.

Judy Horacek: My swirling girl logo in her new 2020 colours, all over the city. Last year I had the greatest time seeing her everywhere – the giant banners, the footpath lights, on all the posters. So much joy!

Damian Callinan: AFL style banners for the acts to run through on opening night.

Your cart is about to expire, would you like to renew it?