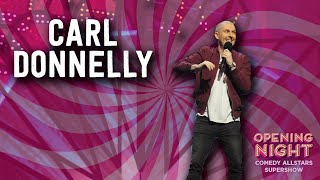 Carl Donnelly Shall We All Just Kill Ourselves? (United Kingdom)

Carl Donnelly Shall We All Just Kill Ourselves? (UK)

Having previously performed shows discussing such things as hallucinogenic therapies and mental health problems, this show explores Carl's frustrations of trying to be good in a world that makes that feel almost impossible. Despite being an environmentally friendly, socially conscious vegan, it still feels like Carl is constantly faced with his own hypocrisy.

Are movements such as Veganism under threat from corporate hijackers? Does trying to live a zero-waste existence matter while governments do next to nothing about climate change? And does simply owning an iPhone render your opinion invalid?

Carl attempts to address all of these questions (while still keeping it funny).

*Carl has twice been nominated for the Edinburgh Comedy Award as well as winning a host of other awards. He has performed at every major comedy festival around the world and has also appeared on various television and radio shows such as Mock The Week, Alan Davies As Yet Untitled and more.

‘Donnelly can provoke laughter out of almost anything. ★★★★' The Scotsman

‘Donnelly simply tells an engrossing and hilarious story from his life. ★★★★' Fest (UK)