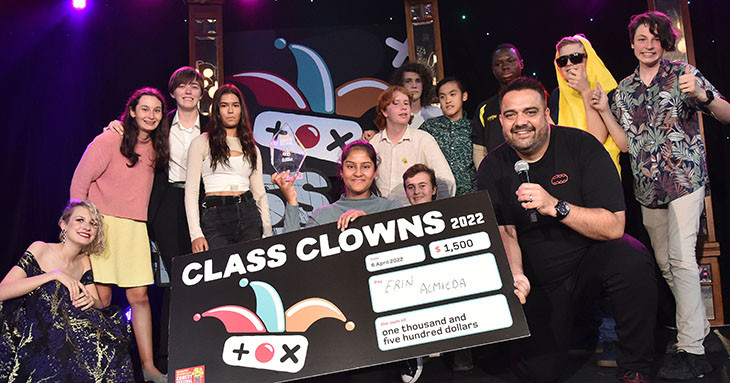 MELBOURNE, 6 APRIL 2022 - Today, 15 year-old Erin Almeida from Loreto College in Ballarat Victoria has been awarded the winner of the 2022 Class Clowns National Grand Final, held as part of the 2022 Melbourne International Comedy Festival.

Now in its 26th year, the Melbourne International Comedy Festival’s Class Clowns program has helped hundreds of young people develop their comedy potential. Part of a raft of development programs including RAW Comedy and Deadly Funny, the Melbourne International Comedy Festival is dedicated to cultivating the next generation of funny people as well as new and unique voices.

With a total 144 registered participants – heats and state finals took place across Australia. Today, 12 finalists from around the nation took to the stage in front of a live audience and a panel of industry experts to perform stand-up, sketch and parody for their chance to be crowned the funniest teen (or teens) in the country.

Today’s event at The Famous Spiegeltent at Arts Centre Melbourne was hosted by Dane Simpson, with special guest performances from Oliver Coleman and Kirsty Webeck. Erin Almeida’s performance impressed the judges, demonstrating an exceptionally mature sense of humour. Erin walked away with a prize of $1,500, a $1,000 workshop package for their school, plus the Class Clowns trophy.

Three runners up were also given kudos by the judges: Special mentions to Arikki Soo from Southern Christian College, Tasmania, Shayla Keane from Santa Maria College and Hardy Croucher from Great Southern Grammar, both in Western Australia.

Class Clowns Producer, Tom Dickins said, ‘This year has been a uniquely challenging year for the parents, teachers, schools, venues and most of all the participants of Class Clowns. I am frankly astonished at the exceptional level of talent, commitment, self-awareness and wit on display from this year’s finalists, particularly in light of the challenges they have faced and overcome. The future of our industry is clearly in capable (and very talented) hands.’

The Class Clowns judging panel said, ‘We were really impressed by the quality of the writing and the delivery. These are performers that we definitely want to hear more from in the future. Older comedians need to watch out because these guys are coming!”