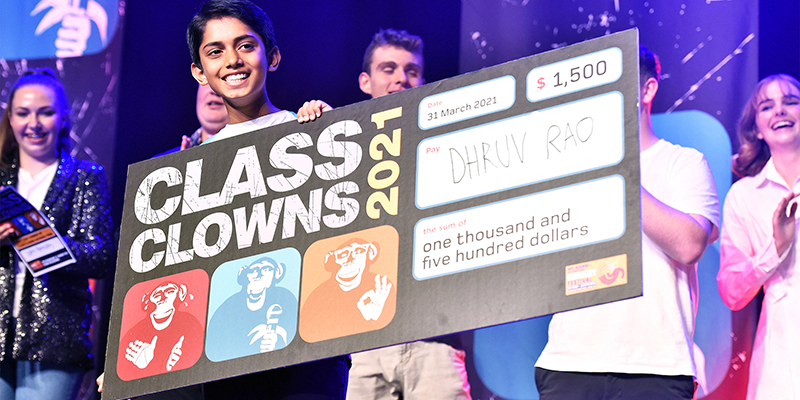 With a total of 161 registered teen participants, heats and state finals took place across Australia. Today, 13 finalists from around the nation took to the stage in front of a live audience and a panel of industry experts to perform stand-up, sketch and parody for their chance to be crowned the funniest teen (or teens) in the country. The winner walked away with a prize of $1,500, a $1,000 workshop package for their school, plus the Class Clowns trophy.

Class Clowns Producer, Tom Dickins said, 'Each year the talent that emerges through our Class Clowns development program is impressive, and this year it was even more so. The past 12 months has been particularly challenging for this age group and all of our entrants have shown remarkable resilience and maturity in their approach to their sets and material.'

Class Clowns judge and past participant Annie Louey said, 'It was a really tight decision for the judges this year, there were so many hilarious, on point observations. The funny translated through the screen as well, with Jai performing his spot from Brisbane. As judges we were thinking about future pathways when selecting a winner, which now includes online content as well as live shows. We chose Dhruv because he was memorable from the very start - I was laughing so much I honestly couldn’t believe what I was seeing because he’s only 14! When I was in the Class Clowns final I didn’t even place, so I’m excited to see what lies ahead for everybody who competed today!'

Class Clowns is more than just a competition; it’s a gateway into comedy for hundreds of young people. Participants from years 9-12 are given access to professional comedians as mentors, taking part in workshops and performing in front of live audiences at a local, state and national level. Head here for more info on Class Clowns.